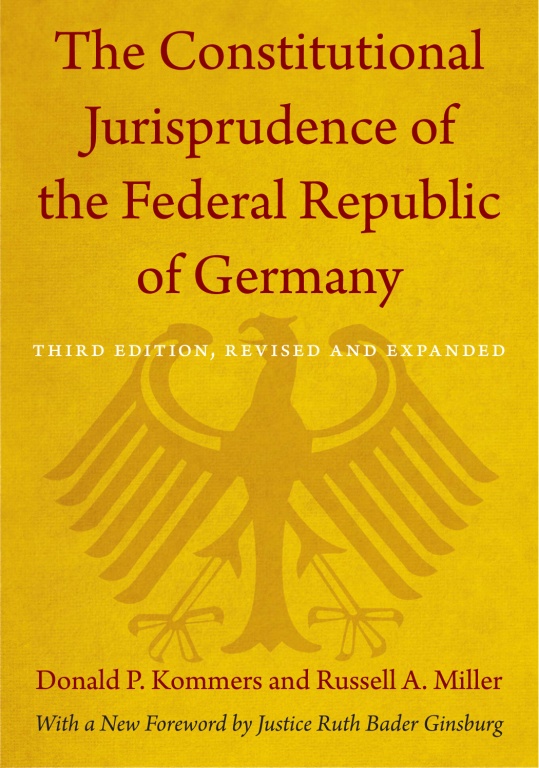 A new book by Washington and Lee Law Professor Russ Miller and coauthor Donald Kommers (Notre Dame) has received an extremely positive review in a leading German newspaper. The book, titled “The Constitutional Jurisprudence of the Federal Republic of Germany” is a major revision of a landmark treatise on German constitutional law first published in 1989.

The book was reviewed in Germany’s paper of record, the “Frankfurter Allgemeine Zeitung,” which is also distributed in 148 countries every day. Below is a partial translation of the review:

So that Americans Can Also Understand the German Constitution

“…  In our digital age, would there be any reason for an updated, print edition of the Constitutional Jurisprudence of the Federal Republic of Germany, which last appeared as a revised edition in 1997?  Luckily, that question was answered in the affirmative.  The new edition is a splendid engagement with an expanded spectrum of themes, touching upon national and global developments, including European integration, terrorism, questions of data privacy, and protection against discrimination.  The expert and insightful updating of the book can be credited to the decision of Donald Kommers – who has recently turned 80 – to bring Russell Miller onto the project as co-author.  Miller, who teaches at Washington & Lee University in Virginia, is one of the best young American scholars of German constitutional law.  But, as Co-Editor of the German Law Journal, he also has an exceptional grasp of border-transcending challenges and other new constitutional law developments.  The Constitutional Jurisprudence profits from all of this, for example, where it is noted that the freedom of opinion in the jurisprudence of the Federal Constitutional Court can comfortably claim to be the ‘equal of any regieme for the protection of freedom of speech provided in the democratic world.’  This is true, the authors explain, despite the complicated balancing process that is central to the German system of rights protection.  Significantly, Kommers and Miller do not open up German constitutional law by systematic comparison with other constitutions.  Instead, they achieve this through their close work with German constitutional law itself. …”

The Constitutional Jurisprudence of the Federal Republic of Germany has long been an invaluable resource for scholars and practitioners of comparative, international, and constitutional law, as well as of German and European politics.  The new edition includes entirely new chapters addressing the relationship between German law and European and international law; social and economic rights, including the property and occupational rights cases that emerged from Germany’s unification; jurisprudence related to issues of equality, particularly gender equality; and the tension between Germany’s counterterrorism efforts and its constitutional guarantees of liberty.