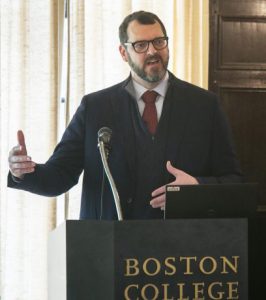 In his February 13 presentation for the Clough Center for the Study of Constitutional Democracy, Miller drew upon his expertise in comparative law to make a distinction between hard and soft constitutional limits on executive power in Germany. He highlighted Chancellor Angela Merkel’s handling of the refugee crisis in the mid-2000s, using executive authority to allow national borders to remain open despite the migration surge.

Miller is a noted scholar in the areas of Constitutional Law, Administrative Law, International Law, and Comparative Law. He is recognized for expertise in German law and legal culture, as editor and author of books including Privacy and Power: A Transatlantic Dialogue in the Shadow of the NSA-Affair and The Constitutional Jurisprudence of the Federal Republic of Germany, and as an editor-in-chief of the German Law Journal.