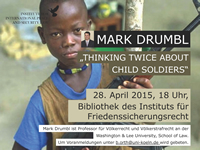 In late April, Washington and Lee law professor Mark Drumbl gave a lecture at the University of Cologne entitled “Thinking Twice About Child Soldiers,” which addressed a number of arguments made in a CNN op/ed and also a blog post. In May, he taught a course on public international law held at Herstmonceaux Castle, in southern England near Hastings and  traveled to the Czech Republic to give a public lecture on “Atrocity Then, Trials Now: The Value of Delayed Justice.” This talk, delivered at Masaryk University School of Law, examined the justifications for prosecuting 93 year-old Oskar Groening, who is currently on trial in Germany and who had served as the accountant and bookkeeper at Auschwitz in the 1940’s.

Finally, in June Drumbl gave a lecture to lawyers at the Department of Justice on evidentiary challenges in securing convictions under the US Child Soldiers 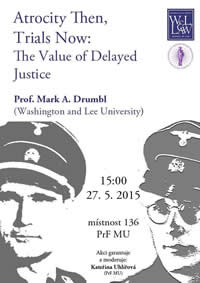 Accountability Act, which gives US courts the ability to prosecute individuals who unlawfully recruit children under the age of fifteen into armed forces or armed groups anywhere in the world.